I am stuck doing Microsoft updates for all the systems at work but the good news is I can remotely log in and push the updates out from the computer at my workbench. So while the gears are turning at work, I had time to finish up the 25-T. Beats going in on the weekend any day.... 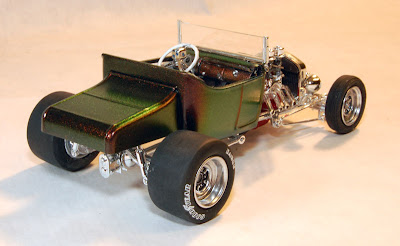 So here it is. The AMT "Parts Pack" chrome frame was built box stock, and it was a pain to build. As I mentioned in an earlier post a lot of parts for the frame didn't line up, and in that it's all chrome made just building it stock hard enough.

I didn't lower the front end, or even replace the straight front axle with a drop axle, which would have made the build less "high boy" looking. But I am still happy with the stance, even if it's not as low as what I originally had in mind. 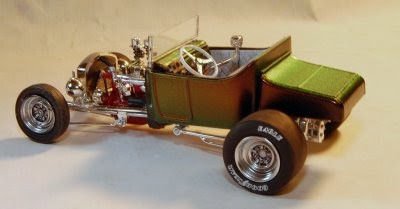 I was dreading the wheels and tires part of this build for good reason. The Parts Pack frame doesn't leave a lot of options for ways to attach the wheels and tires. So I had to improvise. The rear tires came off of AMT/ERTL's Domininos Pizza March 88C #6751 CART racer. Now, it might seem strange to pay $16 just for 2 tires, but, these are really cool tires; besides, the turbo Cosworth V-8 out of this 80's era Indy car (when Indy cars didn't all look the same) is sure to show up on other projects. I had to do some major mods--grinding, drilling, sanding--to the wheel inserts to get them mated to the rear axle, but, that's what epoxy is for, and it came out OK. The Goodyear logos are Shabo transfer lettering--easy to apply and looks a lot better than paint or a decal I think.

Also, there were huge mold seams on the rear tires, and it took me a good 15 minutes each tire to sand them smooth, but, what else do I have to do while Microsoft uploads are going on? 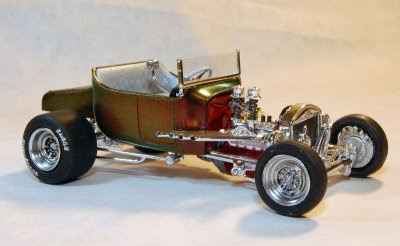 The fronts are from Revell's Thames Panel Truck #7609. Each front is delivered in 2 sections--inner and outer "skinny"--and getting rid of the seam was (well, as far as I can tell) impossible. I sanded to the point where the tread was disappearing and gave up. As you've heard me say before: I have to live with it.

The wheels are resin, but I don't remember exactly what supplier--I had them sitting around so I shot 'em with Alclad II and stuck them on here. 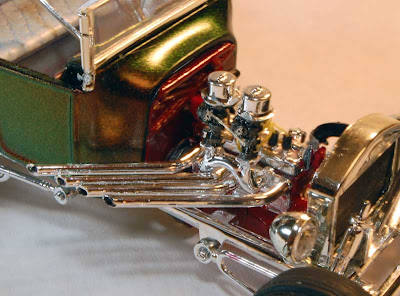 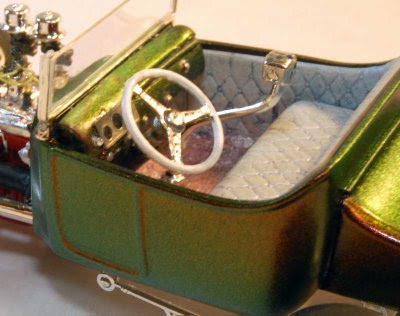 I had a really bad time with the instrument panel. This is a set of photoetched guages from Model Car Garage. The instructions say to put a paint blob on the dash and then drop the dials and photo etch over the blob. Bad idea for me; I didn't paint the blob in the right place. So I had some dials, and a big blob next to them. Fortunately I had covered the 40 Ford dash with Future acrylic clear, so the "mistaken blob" could be polished off. The steering wheel is out of a Vette Kit (don't remember which one). I just couldn't use the Jed Clampet style steering wheel that was included....

The windshield is out of the 25 T "Switchers" kit; I just cut it in half and put the glass in. Without this mod it stood way, way too tall to look good. 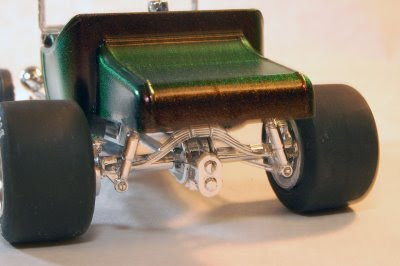 The hardest thing about open wheel rods like this is making everything come out straight and even I think. The rear axles were a real nightmare--they kept splitting under the weight of the build. Next time I am going to glue some sort of support styrene widget inside the axle to strengthen it. In the meantime what you see above is about as good as I could get it. 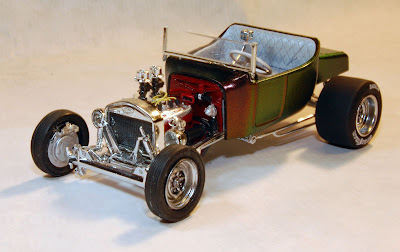 Overall in spite of the litany of issues I talk about in this post, believe it or not, this was a fun build and I'm a bit sorry it's done. But it's on to other th ings--my next build is going to be at least 50% resin so we'll see how that goes. Gotta keep trying new things!
Posted by Charlie Lamm at 4:24 PM