It's been a busy couple of weeks but I still have some time at the bench I'm happy to say. This time I'm continuing to build a scale 69 Charger using scrap parts left over from last month's 69 Vintage Charger 500 Build. 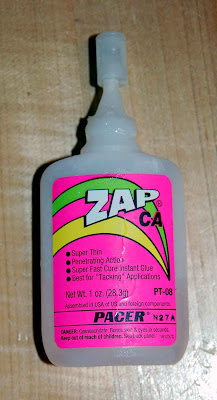 Since I've started up this hobby again I've read about the wonders of using superglue (or "CA glue", or "cyanoacrylate") to bond dissimilar materials together like styrene and craft wiring. But I've not had great results using CA to date. The pictured Pacer ZAP CA glue is what I've used for the past year or so since it's the only brand my local hobby shop carries. Results have been OK for some things: I used ZAP CA and CA accelator to build up the seats of the 32 Texas Old Skool Rod, and the ZAP CA and baking soda to craft the retro floor board for the 55 Chevy Gasser.

However beyond that ZAP CA seemed too runny to be very useful--it's the consistency of water. So for "normal gluing"--engine wiring details for instance--it flowed off the part and stuck to everything else (like, the workbench, or my fingers).

But reading the hobby mags and whatnot, others aren't having this issue. So what gives? 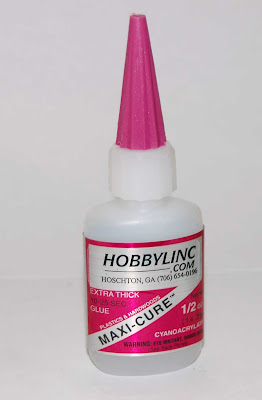 Turns out I was using the wrong glue for the job. CA's aren't all the same when it comes to viscosity. I ended up trying the super thick CA glue from HobbyLinc.com and unlike The ZAP CA offering it's super thick and stays in one place, like Devcon Epoxy or other traditional hobby glues. Perfect! 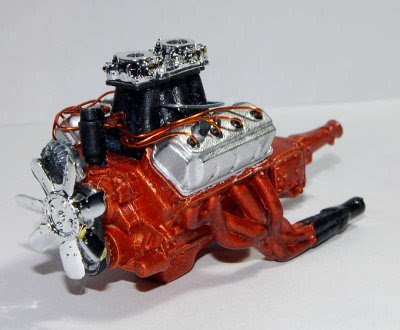 So here's the Charger Scrapper engine so far. The engine block, exhaust pipes and valve covers for the scrap parts 69 Charger comes from Revell's 67 Dodge Charger 2 n 1 85-7669 but the rest is from the parts box. 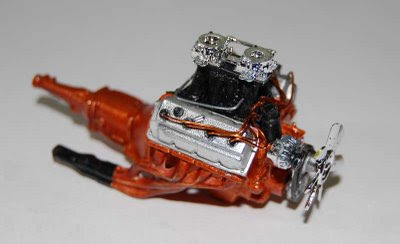 It was a lot of fun digging through the parts box looking for cool engine parts I could use; The intake manifold was scratch built from styrene rod; the magneto came from the AMT BluePrint Parts pack; the carbs are out of from the MPC 32 Ford Switchers kit I used for the 32 Ford Highboy build way back when....but other things like the fan belt and pully assembly--no idea where that came from. 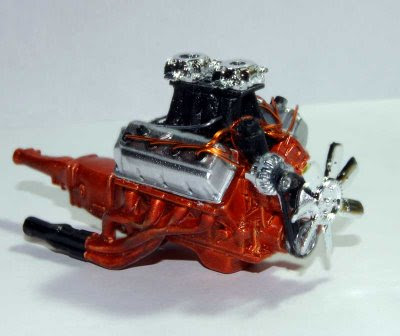 I painted the belt assembly with Alclad II and then detailed the belts with Floquil Engine Black.....lots of fun! 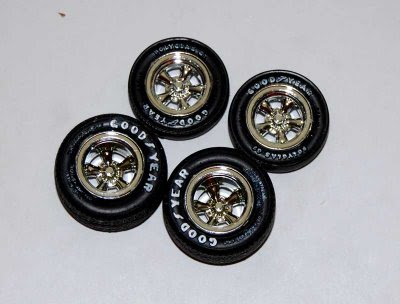 So let's talk wheels and tires.....turns out the MPC 69 Charger 500 has great racing tires and mags....I am finding that some of the older kits might not have the incredible detail and high parts counts that the newer computer-mastered kits have, but MPC's craftmen way back then knew how to create parts that looked great for sure. The rear mags are so deep....not realistic, rather bigger than life; and these optional "2-n-1" parts were treasured by my brothers and me as key additions to our scrap box builds...."cool!"

The MPC tires have nice raised lettering and offer an opportunity work on my "dry brushing" technique, such as it is. The idea is to put paint on a brush, brush out most of the paint, then lightly dust the brush over and over on whatever raised surface you want detailed. 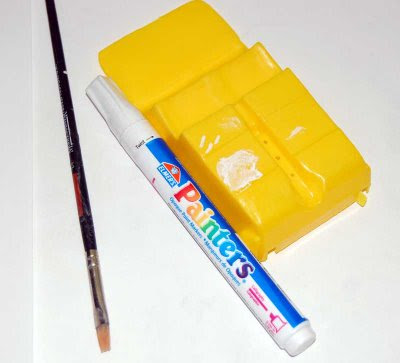 It's not really that easy. I never really got dry brushing to work using acrylic paints like Tamiya flat white--it either ran (too much paint) or stuck to the brush (not enough paint).

I was at the office supply store and found these Elmers "Painters" paint pens so I bought a few. I hoped I could pen the white ink onto the tires, but that didn't work--it made a mess. So I removed the paint with enamel paint thinner. BTW I also discovered the Testors enamel effectively thinner removes Tamiya brush acrylics, better than isopropyl alchohol which I didn't know.

Next I put a blob of the white paint onto a yellow piece of styrene as you see here, then used a small flat brush to dry brush. It worked a lot better! These "Painters" pens seem to have paint that is the perfect consistency for dry brushing. The raised GOODYEAR letters on the MPC tires were done this way. I don't think the guys at Elmers planned on end users using their products like this but I have a feeling they won't mind.
Posted by Charlie Lamm at 8:24 PM