OK it took me over a year to build the difficult and dangerous Audi R8 Kit from Revell. Most of that was waiting for things to dry, pondering a build issue I didn't know how to deal with, or just being busy with other things, but really, a YEAR?  So--do builds really need to take that long?  Let's hope not! What if I use my skills gained from the past 4 or so years of building to build something fast, fast, fast, so it's done over the course of a weekend? And still try to keep things reasonably clean and OCD friendly?  Is it wishful thinking? 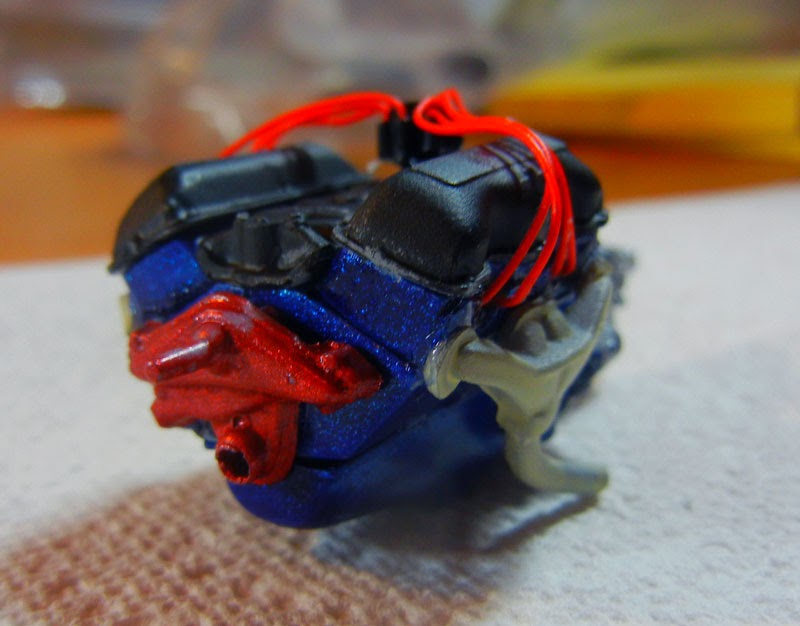 So it's Christmas and I am on call for work but otherwise have a lot of time on my hands.  I started a 58 Impala AMT kit while I was waiting (as was often the case) for things to dry on the R8. The Impala body, BMF, and a few things are already done prior to this weekend, so let's finish the damn thing off! So it's matter of clipping, cleaning, and painting the parts, and doing sub assemblies.
For this build, I tried yet another time saving tip: instead of scraping paint, I'll mask the non visible surfaces so I can just peel off the mask and glue.  For the engine, that saves a lot of time!  It really works! I am probably going to do this going forward for all builds. The engine has been assembled and wired, needs a bit of touch up but that will take seconds.

The chassis/frame got a quick coat of Tamiya Matt Black.  The silver parts are Duplicolor Chrome which to me looks more like aluminum. Faster than Alclad?  Um, yep! Instead of masking the frame, I hand brushed some Future floor polish to offset it from the rest of the undercarriage.  Good enough! 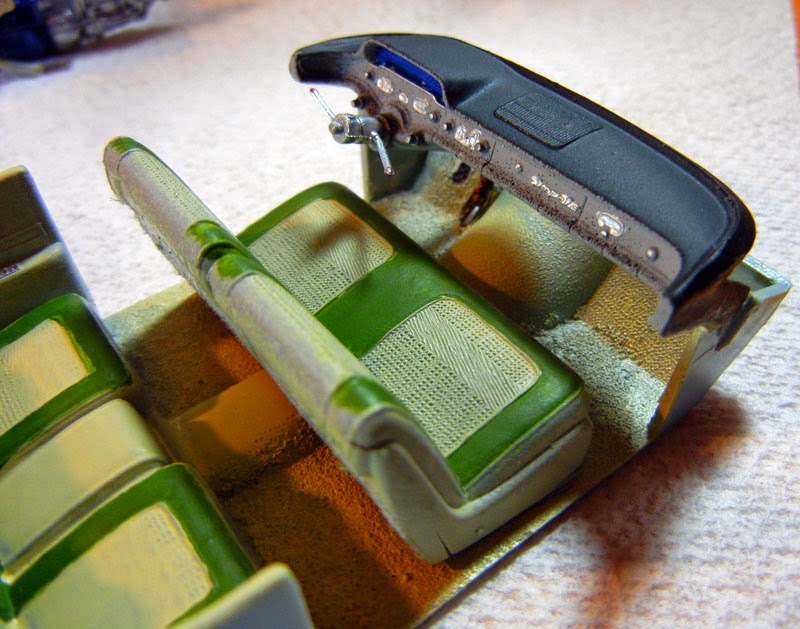 For the interior, masking always takes a lot of time, so why not hand brush?  It's not as clean as masking would have been, but again, I'm doing this fast!  No one will notice the brush strokes anyway right? Carpets are formed with a few sprinkles of Zing embossing powder.  Looks OK and takes about 5 minutes to apply. Good enough! 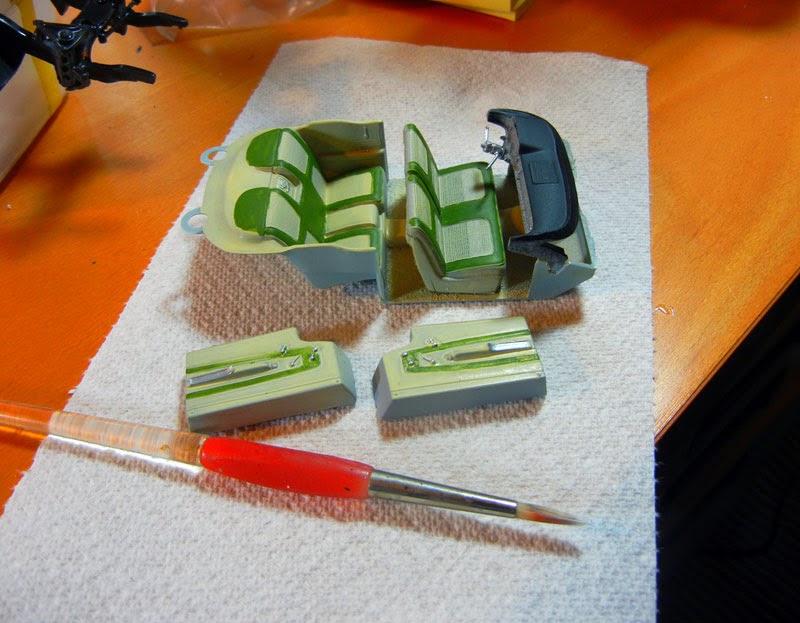 Ah hah!  If you want to "tell a story" as they say in the retail business, have the brush visible along with the parts.  That way you're ready to have the photo in a hobby magazine.  This isn't the brush I used, but it's good enough. 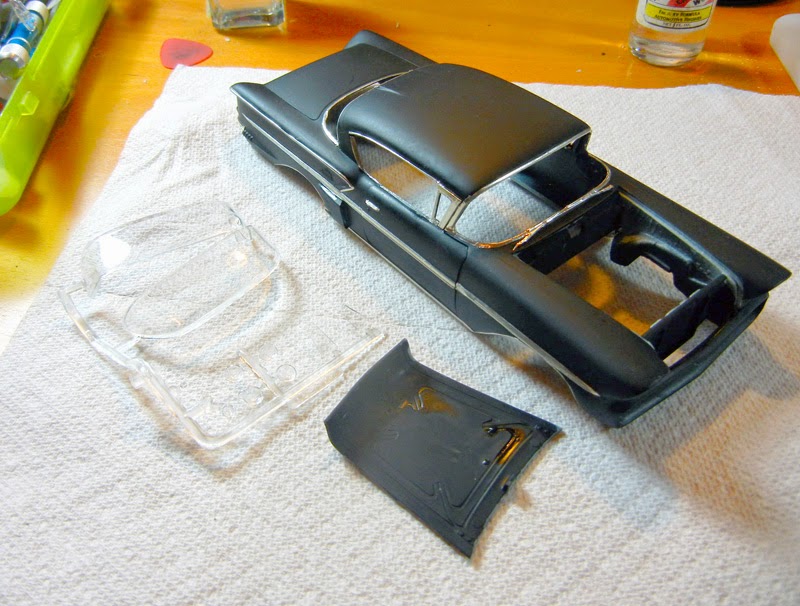 I have found you can't rush bare metal foil-ing but for the Impala I did anyway.  From a distance it looks pretty good.  If you get right up close or use macro shots, not as much. 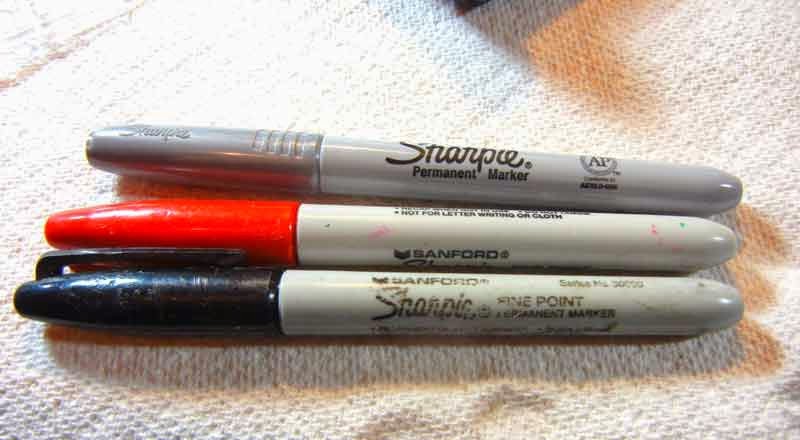 Another huge time save--use Sharpies. Not the paint pens, I have never been able to get consistently good results with those.  Just regular Sharpie's. 1001 uses! I am finding in addition to making things go fast, no setup time, no stirring, no mixing, no brushes to clean, in some cases Sharpies actually work better, since they don't add any thickness to the part.  Edges of body panels, for instance, or steering wheel rims, look better with some Sharpie.  You don't want to add a quarter scale inch to those. 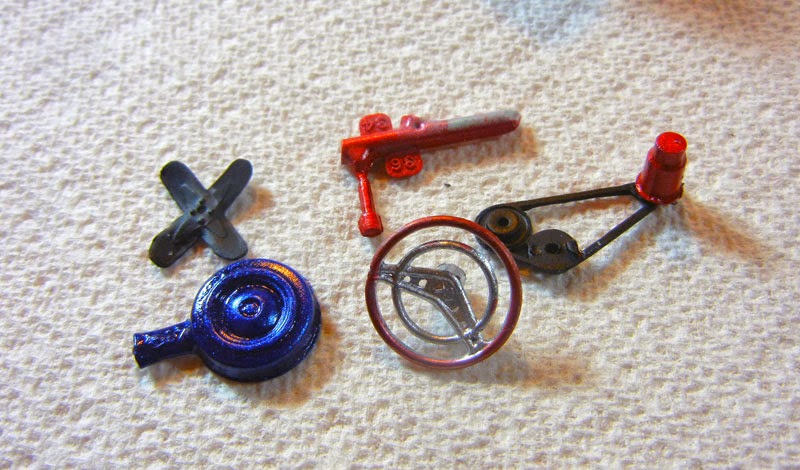 All parts were prepped, ponzi stick'd, and painted the usual way.  All silvers at once, all flat blacks at once.  I didn't get a photo but you have seen this before if you follow this bog, er, blog. I used rattle cans everywhere (faster than setting up an airbrush) and for the block I used Testors One Coat lacquer, the only thing bad I can say about that paint is that they need to make it in about 40 more colors!  It's great stuff! 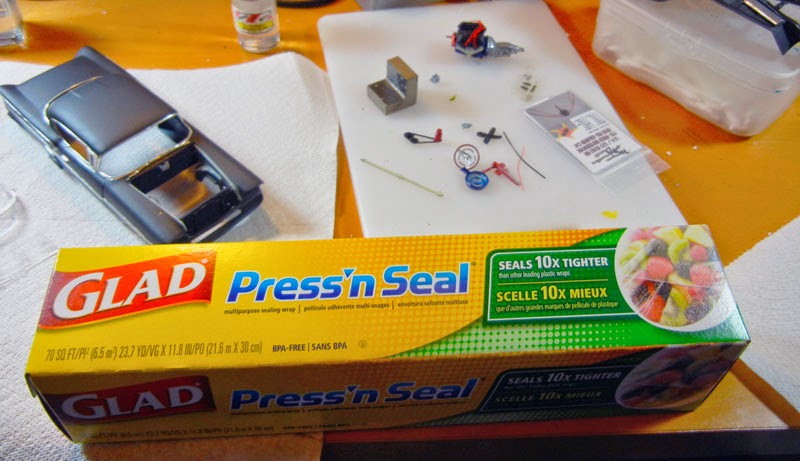 Final time saving tip: Run to your Piggly Wiggly, Safeway, Riskys or whatever, and get some "Glad Press 'n Seal."  First, I like anything that has "'' n " in its name. That alone makes me want to buy it. Second, for masking or protecting a painted surface after it's dry, this stuff is the best.  I saw Chris Chapman, a really low key guy on Youtube, using this to mask a 1:25 body (a 58 impala, oddly enough!), it's sort of like thick Saran Wrap and it really works, it's much faster than putting tape everywhere, and seems to block all the paint I've thrown at it so far.  Boy Howdy!

That Press n' Seal is a great idea!

I'm so going to use it